I’ve recently been looking at how muscles work in a little more detail than  I have for some time. In particular I’ve been looking at the so called Hill type models which place the contractile unit in series or parallel with various elastic or viscous elements. I say “so called” because when I look at Hill’s classic paper   the model is implicit rather than explicit. This probably explains why such a wide family of models are all described as Hill type models (note that a significant number of recent papers refer to the wrong classic paper which doesn’t help).

The serial element is principally comprised of any tendon through which the muscle is attached to a bone. The parallel element is less well understood. For a long time it was assumed that this was primarily extracellular but we now know that titin also contributes within the sarcomere. Whilst in this narrative Hill was somewhat ambiguous about how the PE and SE were aligned he did publish the now famous graph of the length tension relationship for muscle (below) which clearly shows the additive nature of the contractile and parallel elastic elements which can only be a consequence of the two being in parallel. 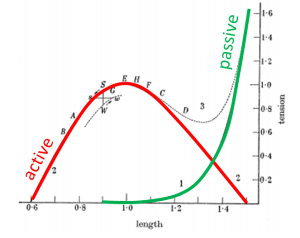 What has interested me from my recent reading has been that if you look at different sources you get quite different estimates of the amount of overlap between the passive and active components. If we assume that the location of the active curve is in the right place then the green curve is displayed shifted either to the left or right. The graphs below are all taken from different web-sites. The overlap between active and passive curves gets less as you go from left to right. So which is correct?

I’ve reduced the size of these but if you were to look at the bigger versions you’d see that most look as if they have been hand sketched and don’t give a great deal of confidence that they are based on any real data. It’s not actually clear from Hill’s paper whether his passive curve is to illustrate the concept or is a represents real data (these data aren’t presented anywhere else within the paper which is principally on the mechanics of active contraction). Lieber (p51), however, presents data  (from Wang et al. 1993) suggesting that Hill’s passive curve may not be too far out. (Of course it may be, particularly if part of the passive curve is attributable to extracellular serial components, that the overlap varies from muscle to muscle or across species).

But does it matter for healthy walking? When anyone performs a physical examination of a healthy person they can generally move the joints through a significantly greater range of motion than is required for normal walking with minimal resistance. When I say minimal resistance we need to remember that the forces exerted by the major muscles during walking can be several multiples of bodyweight  (Hoy et al., 1990). This is strong evidence that the passive elastic element never comes into play during walking. We could probably get away with a simpler model that doesn’t include it at all (that just has a muscle in series with a tendon).

If we look at Hill’s graph again this makes sense as the passive load doesn’t exceed the maximum active load until the fibre is about a third longer than its resting length and there won’t be very many muscles in which the muscle extends by more than this during walking (although care is needed in pennate muscles where the change in muscle belly length may underestimate the change in fibre length). This is largely confirmed by recent data from the Stanford group (Arnold et al. 2013) which  estimates that the rectus femoris is the only muscle in which fibre lengths exceed this length during walking.

Of course this is only true for healthy walking. One of the reasons for conducting a physical examination of our patients is because we know that many of them do have passive contractures of the muscles which limit joint movement significantly. This suggests that the overlap between the active and passive curve in their muscles may be significantly different to that in the rest of us. I’m not aware of any experimental work however to have tested this (anyone know of any?).