Modern academic research is largely a rather slow process taking small incremental steps. I’ve vented my frustration before about how dispiriting it can be to get lost in a fog of low-level research projects which often leave us more confused rather than enlightened. I thus feel I want to celebrate a rare occasion when I do feel a sense of completion of a substantial programme of research.

I was lucky enough to move to Belfast  shortly after Kerr Graham and Aidan Cosgrove  had completed their early work demonstrating the efficacy of Botulinum toxin injections first in hereditary spastic mice and then in children with cerebral palsy. Kerr had departed for Melbourne by the time I arrived but left Niall Eames, an orthopaedic surgeon, lined up to do some research to try and better understand the effect of the toxin. Given that the problem in CP is that the muscles are too short and that Botulinum toxin, by reducing the neural input to the muscle, allows them to elongate, we decided that we should do this by looking at the changes in muscle length. We thus started with some, by modern standards extremely crude, muscle length modelling of the gastrocnemius. 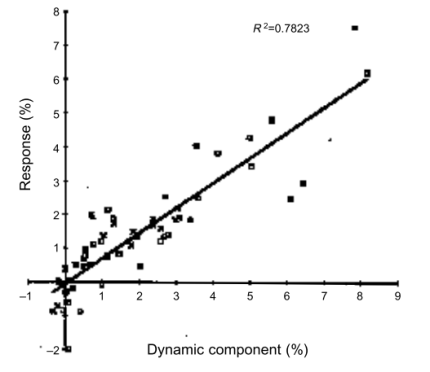 Having developed the model we applied it to a cohort of children with cerebral palsy having Botulinum toxin injections and were able to demonstrate that the action of the toxin was to reduce the “dynamic component” of reduced muscle length (see figure above). This makes a lot of sense as it is this component that is affected by the neural input to the muscle. The “fixed component” (contracture) is largely a consequence of changes to the composition and structure of the muscle and is unlikely to be affected by the toxin. The research also allowed us to understand that the variable response was largely due to children having a different dynamic component rather than of the toxin acting differently and led to reasonably simple prescription guidelines. Botulinum injections to the calf are most likely to be beneficial if the child has a large dynamic component (good range of passive dorsiflexion during physical examination but walking up on their toes). It further explained that the different response in children with diplegia  and hemiplegia was also attributable to them having different magnitudes of dynamic component.

Armed with this understanding I was then able to work with the pharmaceutical company Ipsen to set up a cliniucal trail to establish the most appropriate dose of the toxin. We couldn’t find enough children to study in the UK so had to extend the study to five centres in Poland. We divided children into one of four groups and injected them with either a placebo or one of three different doses. We used the same modelling technique which we had developed for the earlier study to analyse the results and came to  the conclusion that placebo didn’t work (very much) and that the middle dose was the most effective (see figure below). It was interesting that the biomechanical modelling came to clear logical conclusions whereas doctors’ subjective opinions were that the placebo was very nearly as effective as the drug and that they were so impressed by the “improvement” after placebo injection that they would have recommended repeating the process for two thirds of the children! (despite biomechanical evidence that the placebo had had no effect). 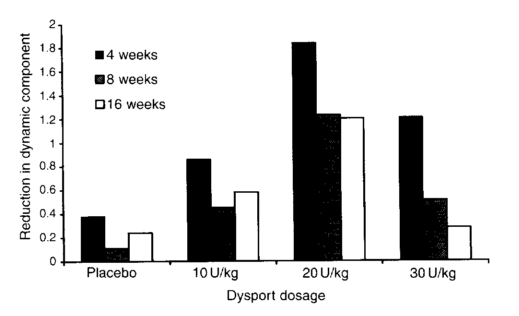 Reduction in dynamic component as a function of different doses of Botulinum toxin at 4, 8 and 16 weeks (Baker et al. 2002)

Having established the most appropriate dose on a single occasion the most obvious remaining question is, “How often should those injections be repeated?”. I’d moved to Melbourne to join Kerr by then and we applied to the Australian National Health and Research Council to fund a clinical trial to compare injections delivered either annually or every four months over a  two year period. Reflecting on the biomechanics we recognised that the long term goal of the injections had more to do with preventing the development of secondary fixed contractures than on the immediate effect on the dynamic component. We would have to measure relatively small changes over a two year time span and thus devised a method to standardise the measurement of passive dorsiflexion range as much as possible.

Which brings me to the stimulus for writing this post in that the results of that study have just been published . The first conclusion is that passive range of dorsiflexion was maintained over the two year period by both injection regimes. We had no true control, because by this stage it wasn’t considered ethical to inject placebo over such a long period, but these measurements were taken over an age range in a child’s life during which preserving dorsiflexion range would be extremely unlikely without injections. The second conclusion was that the more regular injections where only slightly more effective in preserving dorsiflexion range and therefore that there doesn’t appear to be any particular benefit in injecting more regularly than once a year.

Thus after nearly twenty years of research based on the application of thoughtful biomechanics to a clinical problem we finally have clear evidence of which children to inject, how much toxin to inject and how often to repeat this. As one leader of the western world was once heard to comment under less auspicious circumstances, “Mission accomplished!”

Trials like this take so long to organise that we were not actually the first group to complete a study to establish the most appropriate injection frequency. This was actually published about 5 years ago. It was a very similar study (it had been sponsored by Ipsen as a follow-on our to earlier work and I’d had some involvement in its planning before I left for Australia) and arrived at a very similar result. Rather than feeling that there was competition here though it highlights the scientific importance of repeating studies to confirm results. With such an emphasis on innovation in modern clinical research the need to repeat and confirm earlier results, which is an important part of the scientific process, can very often be overlooked.

Lurking somewhere on this blog-site is software that Vicon users can download to calculate “muscle lengths”. It’s based on calculating the distance between the origin of a muscle on one segment and its insertion on another as illustrated in the diagram below (taken from my book). Some of the muscles (such as the rectus femoris) can be best represented as a straight line between the origin and insertion, whereas others (such as psoas or iliacus) have to pass around bones and may be better represented by including a “via point” along the path and adding the lengths of the two lines thus created.

Clearly as the joint or joints linking the relevant segments move this distance changes and you can thus plot muscle length on gait graphs in the same way that you can plot any other gait data. The technique has been around for a very long time but has been particularly popular since Scott Delp’s work on SIMM in the late 1980s.

Recently Jussi has added a comment to the page first saying that he’s got the software working (good) but then that a “somebody” has suggested “that ‘point-to-point’ muscle length models tend to be inaccurate, and a joint angle/moment arm based methods would be more accurate”.

This is quite an interesting comment because I don’t really consider this technique as “accurate”. The technique is based on a rather crude scaling of one set of origin and insertion coordinates. We don’t really know how consistent these are across healthy individuals and certainly not  how they are affected in people with the sorts of conditions that we generally assess in clinical gait analysis (particularly those with bone, joint or muscle deformity). Further the calculations are dependent on the assumptions you make about how the joints move and ultimately on the accuracy of the joint angle measurements. All in all this is probably best described as a technique to “estimate” muscle length rather than to “calculate” it.

The multi-joint muscles are different though because the muscle length depends on the orientation of both joints and the separate moment arms of the muscle about each. It is thus virtually impossible to assess how the muscle length varies through the gait cycle. In this case muscle length graphs are the only sensible way of getting an insight into how a muscle is behaving and can be valuable despite knowing that the actual values are only estimates. At least they are consistent estimates so that there is some sense in comparing the data you estimate for a patient against normative data which you have estimated using the same modelling procedure.

The most obvious example of this is in considering hamstrings length in children with cerebral palsy. It is extremely tempting to see a bent knee and assume that the hamstrings must be short. The “obvious” surgical response is to lengthen them. In many kids, however, the hip is also flexed and, because the moment arm at the hip is greater than that at the knee the muscles is often actually considerably longer than “normal“. This would suggest that surgical lengthening is inappropriate. Scott Delp and Alison Arnold drew the attention clinical community to this nearly twenty years ago and if there is one good reason for including muscle length estimates in gait reports for kids with CP then this is it. The data doesn’t have to be that accurate to be a reminder to surgeons that this is an important issue.

In direct response to Jussi’s question I don’t think its possible to say whether “point-to-point” or moment arm based calculations are more accurate. The calculations are affected by different factors and its not at all clear whether either is superior in general. The accuracy of whichever technique you use will be dependent on the quality of the input data (point coordinates or moment arms). As pointed out above accuracy is limited by a number of other factors and some of these may be more important than the choice of technique. Perhaps most importantly I’m not aware of any research that has ever been done to assess the accuracy of any muscle length calculations (though there is at least one that investigates the  difference in results from a using a number of techniques ).

Of course this assumes that muscle lengths are being used clinically to understand why a patient walks the way they do. Anyone wanting to use them for more technical purposes perhaps in the generation of more advanced muscuol-skeletal models really needs to develop an in depth appreciation of all these factors for themselves.

PS Just to avoid the terminology police its worth reminding people that what almost everyone refers to as “muscle length” is actually the musculotendinous unit length. Maybe this is something that should have been added to my rant on terminology last week.