The graph below shows the vertical component of the ground reaction under an inverted pendulum (Anderson and Pandy, 2006). You can work out the shape the curve must have from basic physics. Early on the pendulum is rising as it moves towards the vertical. As it is does so it gains potential energy and must be losing kinetic energy. Its upward velocity is thus reducing so it has a downward acceleration (i.e. an upward deceleration). If the overall force is acting downwards then the ground reaction (up) must be less than bodyweight (down). As the pendulum moves towards its highest point along a circular arc it rises less slowly, decelerates less, so the ground reaction must get closer to bodyweight. 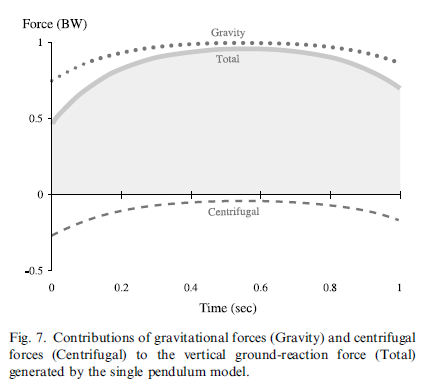 Once it is over the highest point it starts to lose height, and accelerate downwards. Again this requires a downwards force so again the ground reaction (up) must be less than bodyweight (down). The further the mass goes around the circular arc the more quickly it loses height, the more it accelerates, so the ground reaction must be a decreasing fraction of the ground reaction. Easy eh! Appliance of science and we can predict the curve above.

The interesting thing here is that the vertical component of the ground reaction under an inverted pendulum is always less than its own weight. The inverted pendulum may be an excellent mechanism for carrying a mass from one point to another but its a pretty hopeless one for supporting that mass. On reflection this should be obvious because the vertical component of velocity is upwards at the start and downwards at the end and thus the nett acceleration during the movement is downwards and the average force must be less than bodyweight.

If the average force is less than bodyweight then you can’t possibly have a viable walking pattern simply by stringing a series of inverted pendulums together no matter how good the drawings of the kinematics look. 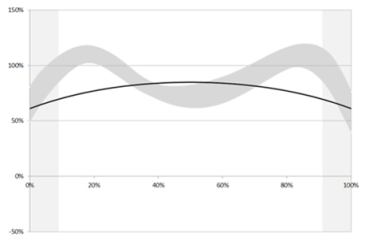 This isn’t the whole story however. If you look more critically at this data you will see that the average vertical component of the ground reaction under the body is still considerably less than bodyweight (about 10% less) for most of us. The peaks aren’t much higher than bodyweight and they don’t last that long. How can we walk around and not support out own bodyweight?

I put these ideas in a slightly wider context in one of the screencasts in the series “Why we walk the way we do. The whole series is linked to on my Videos page.

“Inverted pendulum” is one of those terms that seems to have crept up on me over my time in biomechanics. I don’t remember it being commonly used or taught when I was a student but now it seems to be everywhere. I suspect it is one of those terms that is not understood anywhere nearly as well as it should be. I’m not aware, for instance, of any biomechanics text book that properly explains what an inverted pendulum is or what its mechanical characteristics are. This is particularly important because in mechanics the “inverted pendulum” is more often studied as a classic example of dynamics and control theory (see the Wikipedia article for example). Anyone looking at these descriptions but wanting insight into the biomechanics of walking is going to end up very confused.

An ordinary pendulum is one with the pivot at the top and the mass at the bottom. An inverted pendulum is the opposite way round. The pivot is at the bottom and the mass is on top. Fierljeppen (canal vaulting) is the best example I’ve got of an inverted pendulum (see video below). The pole rotates about its foot (at the bottom of the canal) and transports the vaulter from one side of the canal to the other. “Transports” is the key word here. The inverted pendulum is a mechanism for carrying an object form one place to another and this is how it functions during walking. The “passenger unit” as Perry would call it is carried forward by the outstretched leg as it pivots over the foot.

The earliest use of the term as a model of the stance phase of walking that I am aware of was by Cavagna et al. (1976). Earlier workers have used different terms for essentially the same concept. The “compass gait” of the much aligned Saunders, Inman and Eberhart (1953) is essentially a description of the inverted pendulum. A decade later Elftman (1966) suggested that “the body moves forwards as if vaulting on a pole” and a further decade on Alexander used the term “stiff-legged gait” (1976). It is probably the more recent work of the dynamic walking group (best summarised by Kuo, 2007) that has really popularised the use of the term.

Some papers refer to Cavagna as having tested the hypothesis that the leg behaves like an inverted pendulum (e.g. Kuo, 2007, page 619). I’ve never found any evidence of this in Cavagna’s writing or anywhere else. He certainly commented that changes in kinetic and potential energy of the centre of mass correlate so that the total energy remains approximately constant throughout the gait cycle but there are an infinite number of ways this can occur without requiring an inverted pendulum mechanism (I might write more about this in a later post).

“Proving” that walking is based on the inverted pendulum is problematic in that at a very broad level it is obvious that walking involves a similar mechanism. The foot is clearly planted and the passenger unit is carried over it by the outstretched leg. On the other hand it is equally clear that the mechanism is not a simple inverted pendulum. The trunk remains upright, there is stance phase knee flexion and the pivot with the floor changes position and anatomical location through stance (Perry’s rockers). Any study attempting to establish whether stance is like an inverted pendulum will inevitably conclude that it is a bit like one but not exactly. Forming a sensible research question to “prove” the importance of this mechanism is quite a challenge.

Anderson and Pandy (2003) reported briefly on the dynamics of the inverted pendulum as a model of stance phase and Buczek and his team in more detail (2006). Both these papers are worth reading and held a couple of surprises for me but I’ll keep those for a later post.